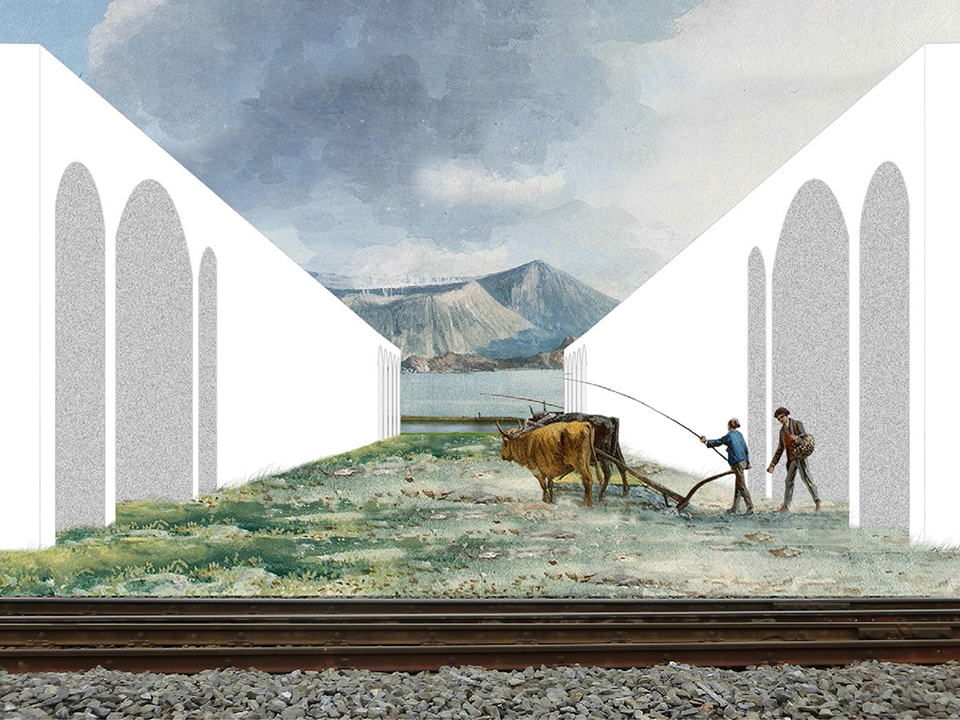 from a thin strip of desolated land embedded in concrete, a reminder of former times, a new sense of life is created from the ruins. from barren lands that still bare the empty remains of a failed industrial past, a new structure is reborn to absorb the new future to come. a structure that, by embracing the past, demonstrates it is not fearful of the fickle nature of changing trends. a structure that wants to sew back together the land, the land that is so starkly torn apart by both the river and rail line, which in turn provide the landscape with a unique frame.

once separated, there is a sense that the two are destined never to meet again, lending us the impression that the surrounding land is split apart indefinitely. the landscape is transformed in a definition of the structure, which acts as a frame immortalising a sequence of portraits of its paths woven by the river and rail line; it is in this way in possession of a strong defence against outside disturbances. the now picturesque environment of the patch of land is a refusal and a refuge to any future urban sprawl, and therefore it is possible to imagine a sense of beauty eternal.
the security of the structure lies in the solidity to its introverted landscape, whilst the uniform repetition brings a sense of order without becoming overly powerful on a human scale.

the exasperated rhythm of the walls has a calming effect on the landscape, particularly when coupled with the nearby flowing river. the sense of security is echoed in the service spaces housed within the frame of the structure, which themselves become containers of the basic necessities and amenities of daily life.

the main components of the human living spaces become secondary; those that are found to exist within the structure seem to almost be bought to life in ceaseless

transformations with time and seasons, and with changing needs and trends. in a society of momentary and forgetful existence, the structure has no sense of time, the strong interaction between the walls and the framed landscape seeks to bring comfort through its solidarity, solidity and strength, guiding social growth through longevity.